Beginning in the early 1990s connecting to the internet began as a simple direct path. Nowadays things have advanced and have become more complex but also more capable. Instead of a single Ethernet connection to the internet, microcontrollers and other devices can connect through a long list of protocols: Bluetooth, WiFi, BLE, ZigBee, 3G, 4G, 5G, NFC, RFID, SigFox, DigiMesh, Thread, and 6LoWPAN to name a few. Each of these connections plays a valuable role for device connection and data transmission, but one budding protocol we would like to highlight is LoRaWan.

Like those listed above, LoRaWAN is a wireless connection network for data communication to the internet. LoRaWan is quickly set itself apart as it becomes known and tailored to IoT (Internet of Things) applications that require long-range and low-power connectivity to the internet without WiFi. LoRaWan is a great answer for remote battery-powered sensors or devices that communicate over long distances or in remote places. LoRaWan said simply, packages data are sent, when needed, over long distances to the nearest, most available gateway which forwards said packets of data to the server for storage, computation, or visualization.

To become more familiar with LoRaWAN, let’s got back to 2009 when the precursor to LoRaWAN called LPWAN began in France:

LPWAN is the cumulative network that encompasses LoRaWAN. Hence, the two are not synonymous, but instead two separate networks. LPWAN came first and then adopted under it several networks that each had their unique historical upbringing. Some of these adopted networks include AlarmNet (which was later taken under ownership by Honeywell), the 2G network, and LoRaWAN, which was created by a group called the LoRa alliance in 2014 and is amongst the leading and favorite protocols for connected devices. 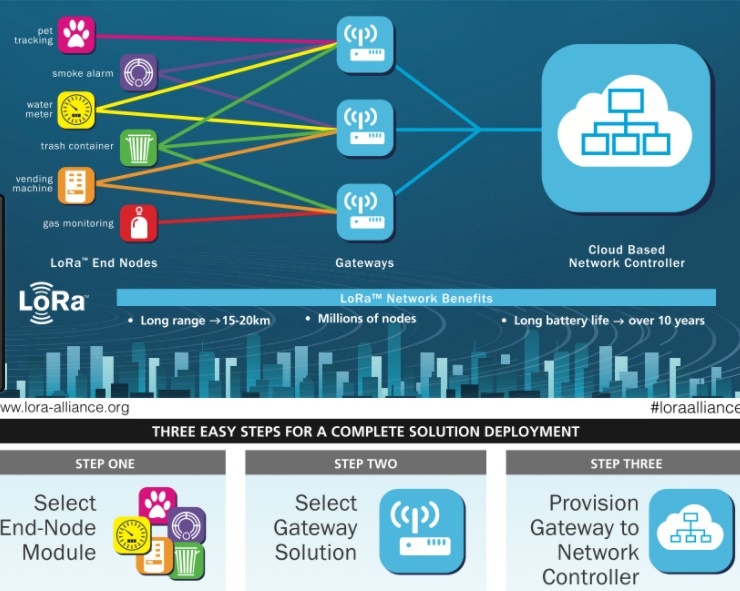 Using the infographic above, sensor connecting to the internet is referred to as end–devices. Whenever the sensor takes a reading the device conditionally sends a signal (data packet) that the gateways to capture the data. Now that data at the gateway uses FSK (Frequency Shift Keying) to transmit that data as efficiently as possible to the server using a process called the Chirp Spread Spectrum (CSS). As the data packet from the end device enters the circuitry of the gateway, it comes in “chirps,” or symbols that represent digital information (like below). The chirp is then parsed down to the frequency domain and then a modulated signal to efficient data transport. 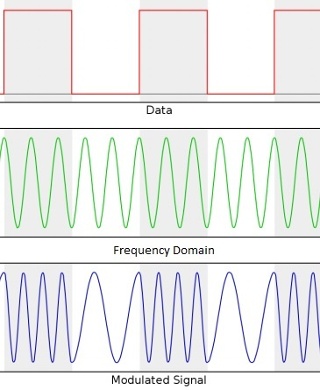 The end-devices and gateways continuously interact with each other so that the data transmission can “hop” to other frequency channels that best suits the system’s power, speed, duty cycle, and range restraints.

During this frequency modulation, other integrated circuits within the LoRa gateway performs other “improvement” modulations, like filtering out noise, or the jaggedness that you see in a signal.

Another reason why LoRaWAN is a low-power, long-range network is thanks to a process called ADR (Adaptive Data Rate). Just like how the FSK process “shifts” the input signal frequency to boost efficiency, ADR “talks” to the LoRaWAN network server to boost the data rate. This is how the “talking” is done between device and server:

After the gateways receive and interpret a data packet using LoRa technology, the gateway forwards the data to the network server via standard IP connections, like Ethernet or 3G. If the network server receives the same data packet from several gateways, it will only process one of them, and disregard the copies. Hence, if the server will receive three of the same data packet because the trash can is connected to three gateways in our illustration, then only one of these data packets will be processed, making for a highly accurate and very efficient data transfer.

As in every engineering application, there are trade-offs in the world of LoRaWAN when it comes to power, speed, and range. This simple diagram below displays the points of consideration. 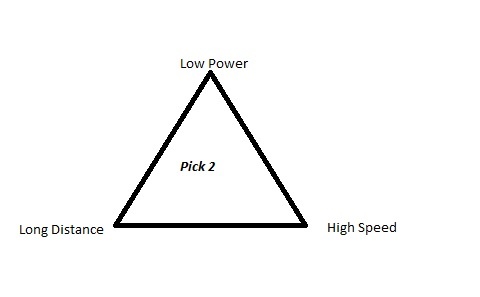 LoRaWAN uses lower radio frequencies at a longer range, and the frequency bands differ between countries.

LoRaWAN categorizes its end-devices in three different classes to address the different needs reflected in the wide range of applications. 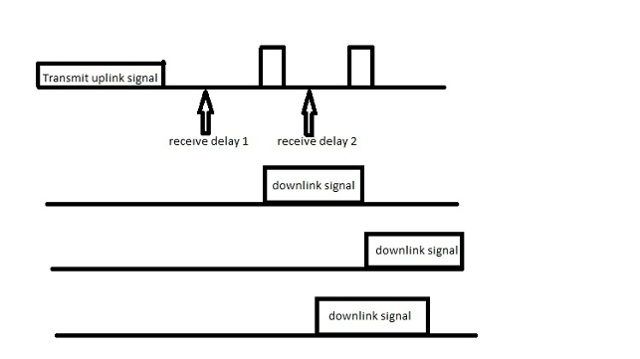 To participate in a LoRaWAN network, each end-device has to be personalized and activated. The functionality of this process is summarized in these steps:

If step 7 is successful, OTAA is accomplished.

Under certain circumstances, end-devices can be activated by personalization. Activation by personalization directly ties an end-device to a specific network, by-passing the join request – join accept procedure. So, opposite to that of OTAA, the DevAddr and the two session keys NwkSKey and AppSKey are directly stored into the end-device instead of the DevEUI, AppEUI and the AppKey. Simply, the end-device is already equipped with the required information for participating in a specific LoRa network when started.

The advantage of ABP is that it is easy to connect to the network because the device can be made operational in little time, which is very suitable for certain applications. The disadvantage is that the encryption keys enabling communication with the network are pre-configured in the device, which weakens security.

To summarize, the key points of LoRaWan:

Refer to this section for definitions of technical terms to aid you in understanding LoRaWAN. For your convenience, these words will be bolded in the tutorial when used.

AppEUI:is a global application ID that addresses space and uniquely identifies the application provider (owner) of the end-device.

AppSKey: is used by both the network server and the end-device to encrypt and decrypt the payload field of application-specific data messages

Band: a range of frequencies with a specific least frequency and greatest frequency

Bandwidth: measures how much data can be sent over a specific connection in a given amount of time (synonymous with data rate)

Chirp Spread Spectrum: a type of modulation technology that is responsible for the reliability of the transmission as well as low power consumption

Cloud: a platform designed to store and process IoT data. The platform is built to process massive volumes of data generated by devices, sensors, websites, applications, customers and partners and initiate actions for real-time responses.

DevAddr:contains a network identifier (NwkID) to separate addresses of territorially overlapping networks of different network operators and to remedy roaming issues. It also contains a network address (NwkAddr) of the end-device.

DevNonce: a random value associated with an end-device. If an end-device tries connecting to the server with a DevNonce value that it has already previously used before, the server will ignore the request, preventing a system catastrophe known as replay attacks

Downlink: the link (connection) from a satellite to a ground station. Frequency of downlink signals tend to be broader to cover a large area on earth and provide as many services as possible

Duty Cycle: the percentage of the ratio of pulse duration, or pulse width (PW) to the total period (T) of the waveform. Duty Cycle = PW/T * 100%

Here’s a diagram to help you better visualize what a duty cycle is: 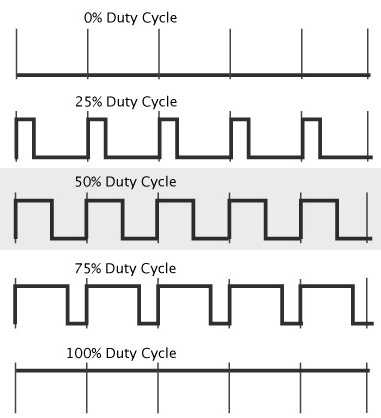 End-device/Node/End-point: an Internet-capable computer hardware device. The term can refer to desktop computers, laptops, smart phones, tablets, thin clients, printers, or literally any object that can connect to the internet

Frequency channel: when a band is channelized, that means there are specific discrete frequencies that a device (like a radio) will use and transmit data on. Instead of arbitrarily choosing random frequencies to use within the band, a device or network will stick to a certain step size to boost efficiency and avoid wasting gaps between different frequencies. For example, for a band 28-29 MHz, 3 different 100KHz channels could be 28.1 MHz, 28.2 MHz, 28.3 MHz, etc

Front-end: users (like a human being, or a program) interact with the application directly

NwkSKey:is used by both the network server and the end-device to calculate and verify the MIC (message integrity code) of all data messages to ensure data integrity.

Throughput: a measure of how many units of information a system can process in a given amount of time

Uplink: the link (connection) from a ground station up to a satellite. In IoT applications, signals must cross the atmosphere where attenuation is inevitable (from rain, for example). To avoid as much attenuation as possible, stations on earth boost their uplink signals with more power so that the frequency is narrower (so the signal could “fit” through obstructions in the environment). Hence, uplink signals generally have higher frequencies than downlink signals.

How to build an IoT application in under a day